Available for pre-order for $99. The price becomes $249 once published.

The section below is a preview of this book, which is in progress. You can pre-order the book for $99. The price after book's completion will be $249.

If you pre-order the book, you will be emailed about new chapters as they become available.

We will cover the following topics in this chapter:

As you learned from the Introduction chapter, this book assumes a basic understanding of JavaScript, React/Next.js, and Express. Alhough we will have occasional detours to discuss basics, these detours will be rare. If you are new to concepts such as HTTP, Promise, async-await, server-side rendering, MongoDB index - you should read our first book, Builder Book.

In the Introduction chapter, we discussed our motivation to write this book and showed a final structure of the project you will build in this book. You may have noticed from the project's structure, that the final project has two servers: app and api.

The api server is an Express server that contains all internal and external APIs - for example, an API to display a list of Posts or an API for Google OAuth.

Instructions on installing it to your machine:
https://www.linuxtechi.com/ubuntu-18-04-lts-desktop-installation-guide-screenshots/

If you bought our first book, you know that we make the entire codebase for our book public. For this book, the codebase is hosted on our public repo:

After you succesfully install Ubuntu, press Ctrl+Alt+T to start a new terminal.

Inside your terminal, navigate to the folder on your computers where you want to save all chapters' folders. Navigate between directories using cd or cd ...

To copy the 1-begin codebase from GitHub, you have to run a Git command inside your terminal:
git clone https://github.com/async-labs/saas.git

Navigate to the cloned folder, find the book folder and enter book/1-begin. As you can see, since this the very beginning of our journey, this folder is empty.

At this point, you have installed Ubuntu, used the terminal, and used GitHub and Git to copy the book's codebase to your local machine.

The next step is to install a code editor on your local machine. Over years of writing software, we found Visual Studio code editor to be a good choice.

We use version 1.38 as of writing of this book.

Once installed, open the code editor: 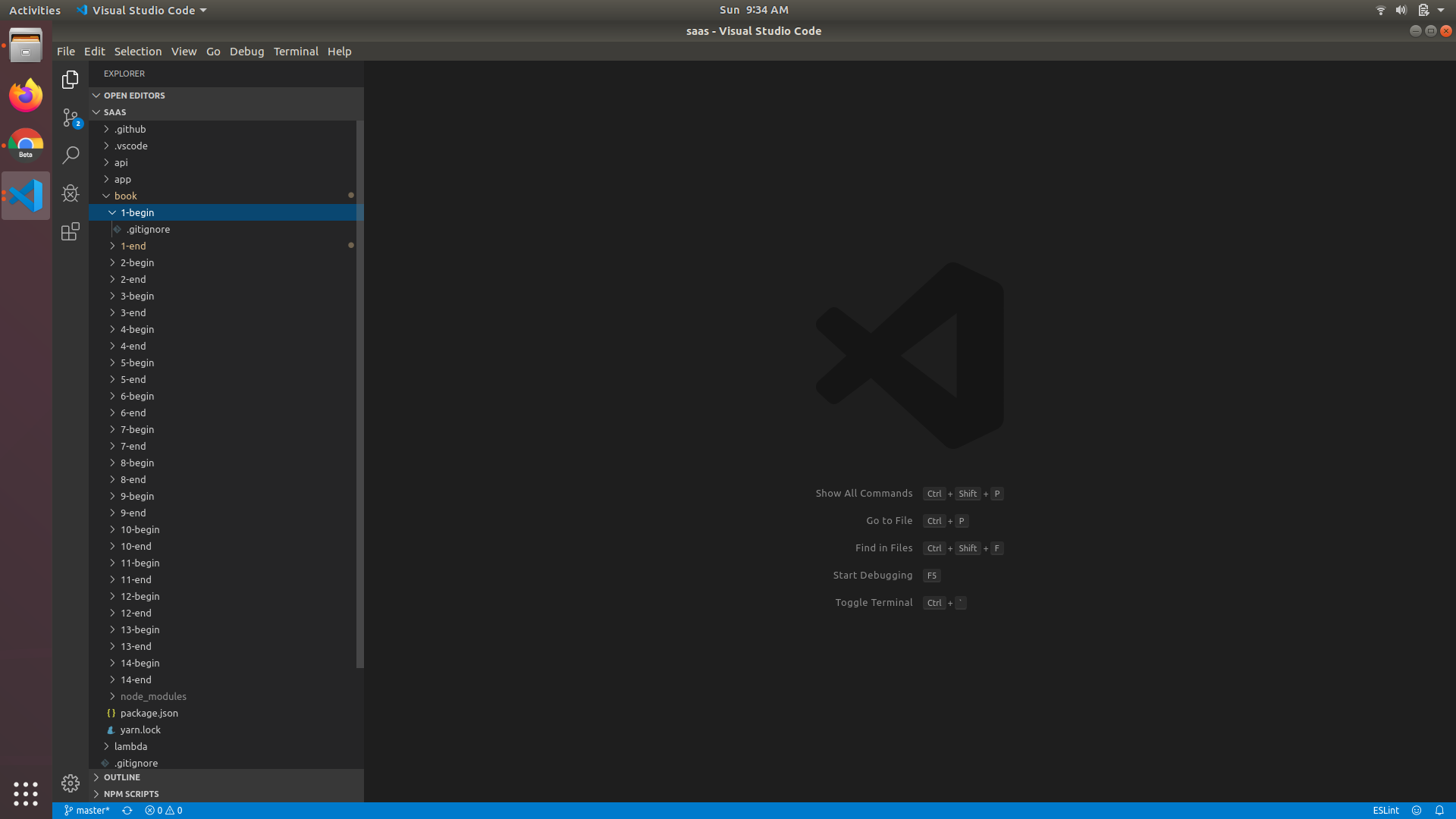 Let's edit some of our settings. Open the saas folder with your code editor. Then go to File (or Code) > Preferences > Settings: 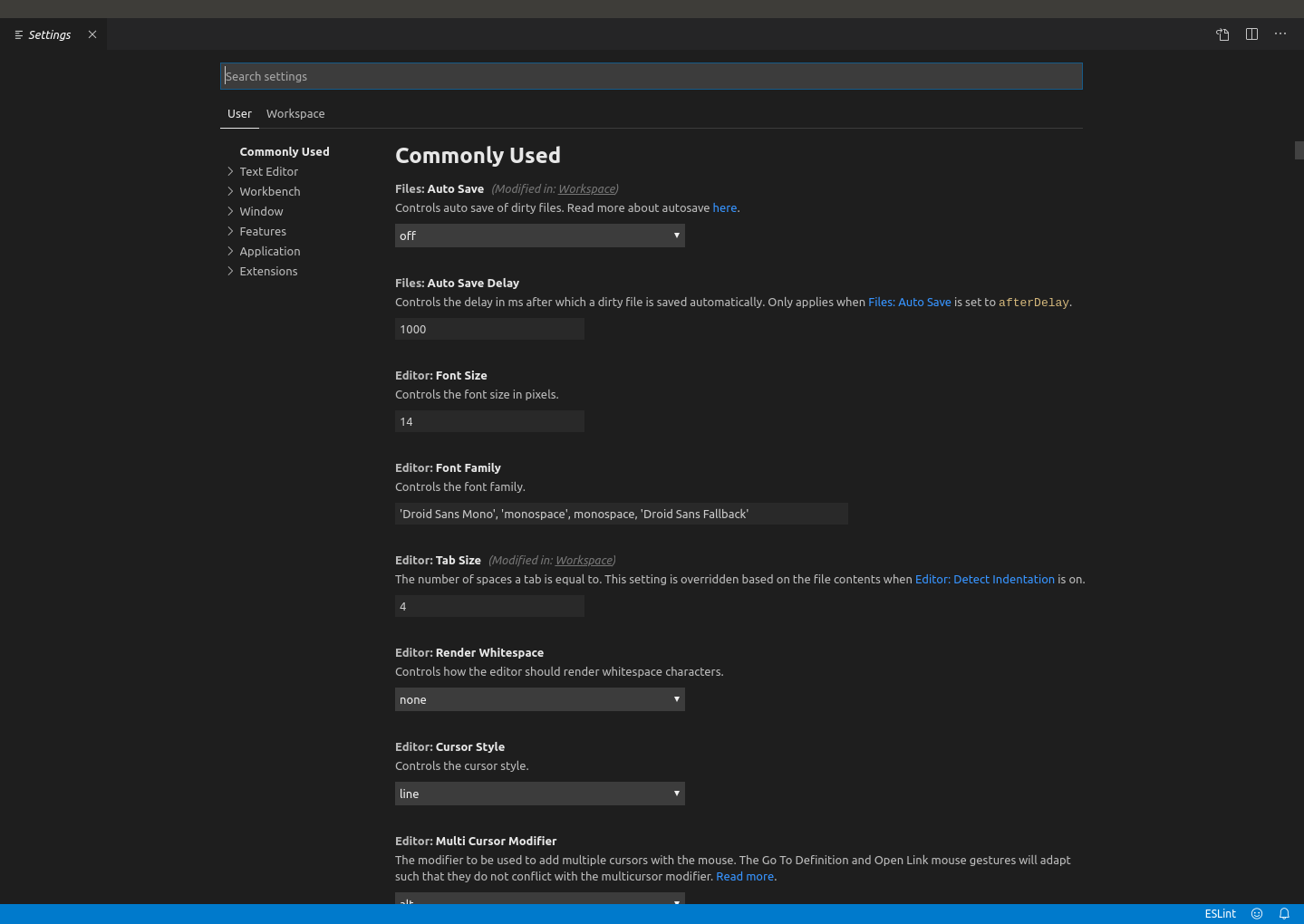 Select the tab that says Workspace. Scroll through the list of different settings and set:

The first setting controls the zoom level of your window. You can also adjust it on the go by pressing Ctrl+ or Ctrl-.

The second setting allows you to automatically save files after you modify them, without manually clicking Ctrl + S.

The third setting commits changes automatically if there are no staged changes.

The last setting allows the editor to automaticallty format code on every save event. Later on, when you press Ctrl+S, the code editor will apply TSLint formatting to the code.

After you modify these settings, your Workspace settings will be saved to the root of the saas folder inside .vscode/settings.json.

Next, we need to install Node, since our servers are Node applications and many tools that we will use throughout the book require Node.

On Ubuntu, press Ctrl+Alt+T to open your terminal (alternatively, use the search bar to search for terminal).

Once Node is installed, we can install Yarn, a manager for third-party packages (also called dependencies or modules). Whenever we need to use code developed by other developers, we add the package name and version to a package.json file and run yarn in the app's directory. More on package.json in the next section.

Throughout this book, we are using Yarn instead of Npm package manager.

Install Yarn on Ubuntu as follows:

At this point, you have Node and Yarn installed on your local machine. Now we can create a Node app by defining a package.json file and installing third-party dependencies defined inside the package.json file using Yarn.

As mentioned earlier in this chapter, the final app will consist of app and api servers plus a lambda function. We discuss app server setup in this chapter and introduce api server in Chapter 3.

On your VS code editor, open the cloned saas repo, navigate to the book/1-begin/app folder and create a package.json file.

package.json should contain the app's metadata such as:

Read the official docs on other metadata inside the package.json file. For example, the parameters keywords and license are optional, while parameters name and version are required.

Open your newly created package.json file and add following content to it:
package.json :

You can see required metadata like name and version (version has a format of major.minor.patch).

The dependencies section contains a list of third-party packages that we need in production and development environments. To install all packages from package.json, simply run yarn in your terminal while inside the app directory.

If you see no ^ (caret) and no ~ (tilde) in front of the major.minor.patch version number, then when you run Yarn or Npm, you will install an exact version of the package.

To check if Yarn successfully installed the packages, check the autogenerated node_modules folder or yarn.lock lockfile at the app root directory. The former folder contains the code of third-party packages, and the latter file contains the exact versions of packages and packages they depend on.

The section of package.json called scripts contains shortcuts for commands. At the end of this book, in Chapter 13, the scripts section will contain the following command:

You can see that is much easier to type yarn build in your terminal window than yarn next build && tsc --project tsconfig.server.json. Thus, scripts are essentially shortcuts.

In this chapter, the commands are still short enough that shortcuts are not as useful, but they will become more useful as you progress.

We will discuss the dev and build scripts later in this chapter, in section app server.

We can also prepend any command with a so-called environmental variable, for example:

If you ran the yarn command inside the 1-begin/app folder and found the newly generated node_modules and yarn.lock, then you successfully installed all packages we need for Chapter 1. We will discuss each installed package as we go.

The section above is a preview of this book, which is in progress. You can pre-order the book for $99. The price after book's completion will be $249.

If you pre-order the book, you will be emailed about new chapters as they become available.

Available for pre-order for $99. The price becomes $249 once published.